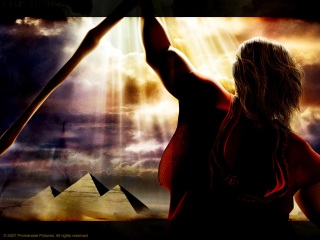 Genesis, Exodus, Leviticus, Numbers, Deuteronomy – the first five books of the Bible are kind of a set called the Pentateuch which means “five books.” These books were written by Moses. These books have much to teach us about God and how we relate to Him. These lessons are taught through God’s relationship with early humanity, the fathers of Israel, and the nation of Israel itself. I see three main themes in the Pentateuch. They are: election, covenant, and worship.

God’s sovereign election is glaringly obvious throughout the Pentateuch. A quick outline would go something like this: God chose Abraham out of all the people of the world, He chose Isaac instead of Ishmael, Jacob instead of Esau, and from Jacob he chose Judah as the Messianic tribe and Levi as the priestly tribe. Out of the tribe of Levi God chose the family of Aaron to be the priests among the Levites. All of these choices were made by God, without regard to human choice or morality. The people God chose were not all nice people. Abraham, Isaac, and Jacob were liars. Abraham and Jacob were polygamists. Jacob’s sons were unruly, sexually perverse, and vengeful. God’s choice is powerfully obvious in the Pentateuch.

Covenant comes right on the heels of election. When God elects individuals, He brings them into the covenant. God first makes His covenant with Abram (Gen. 12). From there, God never violates or diminishes the covenant, but He does add to it throughout Abram’s life and reconfirms it with every generation. We see the power of God’s covenant as He is bound by His own word to bring Israel out of Egypt and establish them in Canaan (Gen. 15:12-16; Exod. 1-14). God establishes His covenant with Israel at Sinai (Exod. 20 ff.), and reveals the conditions, curses, and blessings of it throughout the remainder of the Pentateuch. Everything God does is on the basis of His covenants. Covenant is an indispensable theme in the Pentateuch.

Worship is an important theme in the Pentateuch. This is obvious because there is an entire book dedicated to laws and ceremonies regarding Israel’s relationship with God – Leviticus. We see worship as early as Genesis 4 where Cain kills Abel (can anybody say “worship wars?”) over the issue of worship. Abram builds altars and worships God wherever he goes. Isaac also is a worshiper. We see Jacob first encountering God and worshiping Him on his way to Paddan-aram (Gen. 28:10-22). After the Red Sea crossing, Israel stands on the seashore and worships God (Exodus 15). God spends much of the latter part of Exodus giving the measurements and specifications of the tabernacle which would be the place of worship for Israel. Leviticus pertains to the ceremonial laws of Israel and the regulations of the priests. Again, this deals with worship. Worship is a huge theme in Numbers as well. We even see the wrath of God against the Israelites who worship Baal (Numbers 25). Deuteronomy serves as a repeating of the law of God with much mention of the subject of worship. As Moses ends his ministry and passes the mantle on to Joshua, he sings a song in the presence of Israel (Deuteronomy 32).

Perhaps the Pentateuch can be summed up thusly: God chose His people and brought them into His covenant blessing, and as a result they give Him worship. God has also chosen us who are born again to be His people. We are brought into the new covenant by Jesus Christ and we are called to worship our God and Savior. Much as changed in the past 4,000 years since God first chose the Israelites, but God’s nature and holiness have not.

THE BLOG OF STANLEY E. PORTER AND DAVID I. YOON