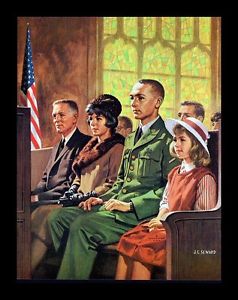 I’ve heard a lot of bad “God and Country” sermons. Quite frankly, I’ve preached some myself. You’ve probably heard them as well. They usually equate America with Israel in the Old Testament and claim the conditional blessings and cursings outlined by God in Deuteronomy and other passages as applying to America. II Chronicles 7:14 is often quoted. While I affirm that obedience brings blessing and disobedience brings judgment, we live in an upside-down world and sometimes God’s blessing doesn’t look like the blessings of Deuteronomy. We are following a crucified Savior, after all. The recent ruling by our Supreme Court which legalized same-sex marriage in the United States ought to help us understand that God and country are no longer one and the same.

THE TRADITIONAL CONCEPT OF “GOD AND COUNTRY” IS DEAD

We also need to understand that our American concepts of “God and Country” are incompatible with both the gospel and the current culture in America. American is becoming more like the Roman culture into which the church was born 2000 years ago. As Russell Moore of the Ethics and Religious Liberty Commission has said, “On the wrong side of history? We started on the wrong side of history—a Roman Empire and a cross. Rome’s dead and Jesus is fine.” The church survived and thrived in 1st century Rome. The church will not be overcome now. The Church has divine promises of victory over the forces of evil (Matt. 16:18). America has no such promise. Even in this dark hour, God is sovereign and I believe that God is using this present evil to call Christians away from our American dream fantasy and calling us to great gospel faithfulness and Great Commission vision. God is darkening the canvas against which we are to shine. We’re marching away from Mt. Rushmore and marching toward Mt. Zion.

HISTORY HAS A PREDETERMINED GOAL – HIS NAME IS JESUS

In Revelation 19:6-16 two important events are depicted at the end of this age: the marriage of the lamb and the second coming of Jesus. History is moving toward this glorious goal when the last marriage will be between Jesus and his spotless bride, the Church. This passage also depicts Jesus as a conqueror. He rides upon a white horse, he judges and makes war, his appearance is fearsome, and he strikes down the nations with a sharp sword a rules them with a rod of iron. He is called King of kings and Lord of lords. When Jesus stood before the high priest to be condemned he told him, “But I tell you, from now on you will see the Son of Man seated at the right hand of Power and coming on the clouds of heaven” (Matthew 26:64, ESV). Jesus was facing crucifixion, yet told those who condemned him that he would be revealed at his second coming with power. When Jesus comes again he will shatter the nations like clay pots (Psalm 2:7-9), all rule and authority will be put down (1 Cor. 15:24-25), and the kingdoms of this world will belong to him (Rev. 11:15). These are the same kingdoms that Satan offered Jesus during the temptation in the wilderness (Matthew 4:8-10). As American Christians, we need to remember that America is a kingdom of this world, currently under the dominion of Satan, destined to be judged and conquered by Christ. The Gospel is not a message of national recovery, but a declaration of divine takeover and a call to unconditional surrender. God is not interested in fixing nations. God is interested in establishing his kingdom and putting down all earthly rule and authority.

For Christians, this world is not our home and neither is this country. We are citizens of the kingdom of heaven living in a foreign land. We should not sound like complaining citizens of an earthly kingdom, but as prophetic ambassadors of a heavenly kingdom. While it is true that Jesus is coming again to conquer the nations of this world, it is important to notice that his robe is stained with blood. In Revelation chapter five, Jesus is presented as both a conquering lion and a lamb that has been slaughtered. The path to glory leads to a cross. We cannot forget that we are following a crucified savior. Let us not be surprised if we walk the same road of suffering he walked. Jesus left nothing unclear when he said, ““If anyone would come after me, let him deny himself and take up his cross and follow me. For whoever would save his life will lose it, but whoever loses his life for my sake will find it.”

THE BLOG OF STANLEY E. PORTER AND DAVID I. YOON